Fibonacci forex trading is the basis of many forex trading systems used by a great number of professional forex brokers around the globe, and many billions of dollars are profitable traded every year based on these trading techniques.

Fibonacci was an Italian mathematician and he is best remembered by his world famous Fibonacci sequence, the definition of this sequence is that it’s formed by a series of numbers where each number is the sum of the two preceding numbers; 1, 1, 2, 3, 5, 8, 13 …But in the case of currency trading what is more important for the forex trader is the Fibonacci ratios derived from this sequence of numbers, i.e. .236, .50, .382, .618, etc.

These ratios are mathematical proportions prevalent in many places and structures in nature, as well as in many man made creations.

Forex trading can greatly benefit from this mathematical proportions due to the fact that the oscillations observed in forex charts, where prices are visibly changing in an oscillatory pattern, follow Fibonacci ratios very closely as indicators of resistance and support levels; maybe not to the last cent, but so close as to be really amazing.

Fibonacci price points, or levels, for any forex currency pair can be calculated in advance so that the trader will know when to enter or exit the market if the prediction given by the Fibonacci forex day trading system he uses fulfills its predictions.

Many people tries to make this analysis overly complicated scaring away many new forex traders that are just beginning to understand how the forex market works and how to make a profit in it. But this is not how it has to be. I can’t say it’s a simple concept but it is quite understandable for any trader once he or she has grasped the basics and has had some practice trading using Fibonacci levels along with other secondary indicators that will help to improve the accuracy of the entry and exit point for every particular trade. 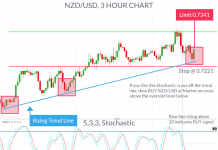 Top 5 Indicators in the Forex Market

Forex Learning To Read Charts And Make Your Profits Explode

Great Profits Can Be Made From Forex And Stocks And Shares